To what extent do you agree or disagree?

Discuss both views and give your own opinion.

1. Some think the best city is "vertical" city where people live and work in tall

buildings. Others think "horizontal" city is better where there are few tall

buildings. Discuss both views and give your own opinion.

2. In some countries, more adults choose to continue to live with their parents even

after they graduate and have found jobs. Do advantages of this outweigh its

3. In modern life, it is no longer acceptable to use animals as food or in other

products, like clothing and medicine. To what extent do you agree or disagree?

4. City dwellers seldom socialize with their neighbors today, and the sense of

community has been lost. Why did this happen? And how can this be solved?

5. Some people think that getting old is entirely bad, while others think that life of

the elderly in modern world is much better than in the past. Discuss both views

and give your own opinion.

6. The world has many towns and cities constructed in previous centuries that were

suitable and livable for people in those times. What problems will these ancient

towns cause today? And what should be done to deal with that?

7. Some people think they have right to use as much fresh water as they want, while

is limited resource. Discuss both views and give your own opinion.

8. Nowadays, the gap between the rich and the poor is becoming wider in some

countries of the world. What problems can this situation cause? What solutions

9. People’s shopping habits depend more on the age group they belong to than other

factors. To what extent do you agree or disagree?

10. More and more people want to buy famous brands of clothes, cars and other items.

What are the reasons? Do you think it is a positive or negative development?

11. Researches show that overeating is as harmful as smoking. Therefore, advertising

for food products should be banned, in the same way as the cigarette advertising

is banned in many countries. To what extent do you agree or disagree?

12. Some people think the spread of multinational companies and globalization

produce positive effects on everyone. To what extent do you agree or disagree?

13. In most cities and towns, the high volumes of road traffic become a problem.

What are the causes of that? And what actions can be taken to solve the problem?

14. In some countries, it is illegal for employers to reject job applications for

jobseekers’ ages. Is it a positive or negative development?

15. Science can tell us some activities are good for our health, while some are bad.

Despite knowing that, millions of people all over the world continue with

unhealthy activities. Why is this the case? And how to change this situation?

16. Some people think zoos are cruel and all the zoos should be closed. However,

others think zoos are useful to protect rare animals. Discuss both these views and

give your own opinion.

17. Some people think only students who achieve the best results should be rewarded,

improvement. Discuss both views and give your own opinion.

18. Some people think governments should focus on reducing environmental

pollution and housing problems to help people prevent illness and disease. To

what extent do you agree or disagree?

19. Some people suggest that a country should try to produce all the food for its

population and import as little food as possible. To what extent do you agree or

20. Some working parents tend to send their children to childcare centers because

they think their children can get good care there. However, other parents think

some family members like grandparents can do this job. Discuss both views and

give your own opinion. 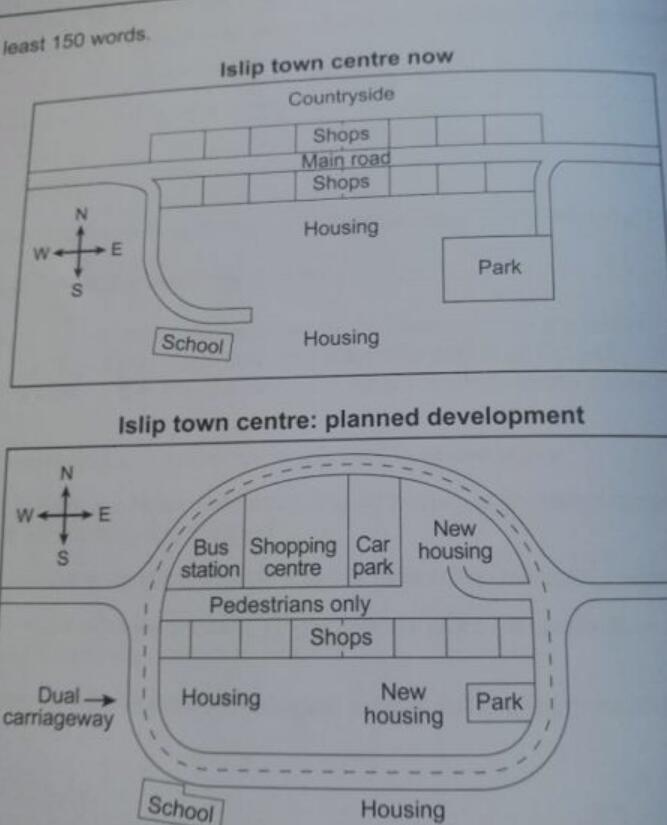 At present, there is a main road running through the central area from the west to the

east. On both sides of it, there are many shops. The countryside is on the north side of

town center, and a housing area is in the south. Meanwhile, a school and a park are

located in the southern and the southwestern parts of the town respectively.

From the second map, we can see that a dual carriageway is planned surrounding the

center, and the current main road will be remodeled into a pedestrian street. On its

northern side, some public constructions will be built such as a bus station, a shopping

center, and a car park from the west to the east. To the east of these constructions,

there will be a new housing area. Shops on the southern side of the street will be as

the same as before. To the south of these shops, another new housing area will emerge.

The size of the park will be reduced, but its location will still be the same. Out of the

ring road, a housing area will be developed, and the school will be located in the same

place as it is now.

To sum up, the central area will be more prosperous and be able to accommodate a 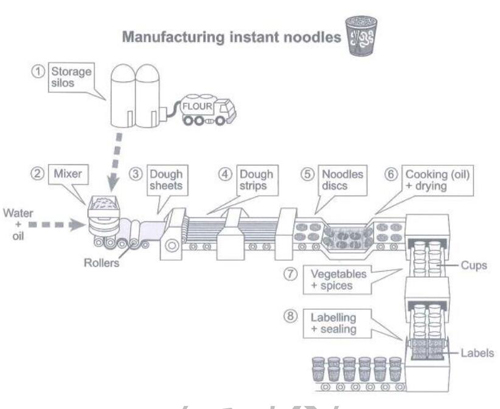 In the first step, flour is transported to storage silos by trucks, and then it is mixed

with water and oil in a mixer. Going through rollers, the mixture becomes dough

sheets, which will be cut into dough strips and then processed into noodles discs over

the next two steps. Thereafter, these discs are ready to be fried by cooking oil and

then will be dried. In the next step, each dried disc will be put into a cup and then

covered by some vegetables and spices. In the last step, those cups are labelled and

sealed. Finally, the whole process is completed by those instant cup noodles being

In summary, for the production of instant noodles, flour, water, oil, vegetables, and

some spices should be prepared as ingredients and seasoning. Meanwhile, after flour,

oil and water is mixed, the dough will be rolled into sheets, cut into stripes, processed

into discs, and deep fried. Subsequently, dried noodles discs will at last be packaged